The Chess Victoria Secondary State Finals were held on the 10th of October at Brighton Grammar. Fresh from their win at the Mt Alexander Cluster, a small team from Clarendon College travelled down and competed with the best Victorian secondary schools had to offer; finishing in a gallant 15th place from 29 schools. This was the first time Clarendon College has participated in the Chess Victorian system having traditionally only played in Kids Unlimited tournaments. Dan Wang demonstrated his leadership and showed the team the way with the top individual score. Hearty thanks to Jeremy O'Carroll for coaching the team on the day in my absence. The competition will no doubt will improve even more next year! 2022 has been a year of rebuilding and there will be many more opportunities in 2023.
Scotch College won the event in a dramatic playoff from Melbourne High.

The Chess Victoria Primary State Finals were held on the 4th of November at Mordialloc College. Qualifying for the event by winning the Bialik tournament earlier in the year, a small intrepid team of 6 from Ballarat Clarendon College travelled the long journey to compete against the best in the state. The tournament format utilised a top 5 board system whereby individual schools played in board order against each other in a head to head, per round basis. The school finished with a score of 3 wins and 4 losses overall; finishing in an all time high for the school, a satisfying equal 5th place from 19 schools. One highlight was Ivan Ju's fine win on board 3 in the last round. He was hesitant at first to go up this high but my faith in him was duly rewarded. Ishan and Jimmy also contributed several good wins to the team's top result. Each player in the team had a game scored for them as something to remember the tournament by.
The result bodes well for 2023 with more tournaments planned with the return of Kids Unlimited to over the board play.
Glendal Primary  30
Glen Waverly Primary 26
Balwyn North Primary 22
Tulliallan Primary 19.5
Glenhuntly Primary 19
Ballarat Clarendon College 19
St Andrews Primary 18.5
Sandringham East Primary 18
Candlebark 17.5
Montessori Primary 17

vs Montessori 3-2
vs Mount View Primary (A highlight for me; one of the great primary teams) 4-1
vs Spensley St 4-1
Losses:
vs Candlebark 3-2 (So close against our old rival school!)
vs Glenhuntly PS 3-2
vs St Andrews 3-2
vs Balwyn North PS 3-2
Friendly Match vs Saint Pats College

On the 4th of September, a small visiting team from Saint Patrick's College came to Ballarat Clarendon College for a friendly match. This was a tradition established by Ben Naughton in 2019 and I was keen to see this revive and continue. Saint Patrick's team have made Kids Unlimited National Finals in consecutive years and so this would be a real test of the largely Middle Years group from Clarendon. The friendly match was fought over 11 boards with two games per pairing (one of each colour) played over a 15 minute time control. The visiting team showed their strength and class in winning 13.5-6.5. The match provided some excellent experience for the younger players which was their first over the board inter-school experience since 2019.  Veteran player Kalen Douglas was the hosts' highest winner in the second game on board 3. Thomas Lin and Afif Chowdhury also played very well in securing wins in both games.

Other highlights included Leonard Goodison's quality performance in outplaying old sparring partner Dan Wang on top board. Leonard won the exchange in both games and showed considerably good technique in converting the wins. Justin Goodison won both games against Vishnu Neralla on board 2 and was stalwart in defense in the second game; making a timely bishop sacrifice to stave off the attack and take the full point.

A big thanks to Nathaniel Winfield for leading Saint Pats and making the match possible. We look forward to more matches in the future with other school clubs who are slowly becoming more active post-pandemic. The more secondary schools who get involved, the more likely we could create a round robin tournament to include all of them. Watch this space!

Returning in 2022 was one of the premier events for primary and secondary interschool chess; the Mount Alexander Chess Challenge. On September 14, Ballarat Clarendon College travelled to Castlemaine Secondary College to compete in this huge event.  The last time the school did so was back in 2017 and thus it was great to play once again. This was the youngest team ever to compete for the school; with all juniors aged from year 1-4. They played amazingly well for a valiant 2nd place from 12 schools. One of our perennial rival schools, Candlebark won the tournament by just two points in the final round. Rey Mukherjee scored a fantastic 6/6 but it wasn't quite enough for an individual medal due to countback. Terrance Wang remarkably made it to board 1 and nearly won the tournament individually with a mighty score of 5/6. Wendy Tian also won the best girl prize in the entire primary division which was incredible; capping off a fine term's chess.

160 primary students played 6 rounds of chess over the day which was ably arbitered by Nigel Barrow. A massive thanks to Rotary for the BBQ, Bendigo Chess Club, Chess Squared, Mark Johansson at Castlemaine SC and Harry Poulton for making it all possible. Looking forward already to next year!

The following five players were the contributors to the primary team score and received a silver medal for coming 2nd overall.

Rey Mukherjee 6/6 (4th place individually by countback - amazing from Rey, underlining a great year of chess achievement.)
Declan Mahar 5/6 (Declan was in his element competing in his first tournament. A terrific result for him.)
Terrance Wang 5/6 (A fantastic result for the quickly developing junior.)
Lucas Yang 5/6 (The Semester 1 JS champion showing his growing strength.)
Nathan Soo 5/6 (A worthy medal for Nathan who has had a great term.)

Ballarat Clarendon's Secondary team won their division in a most convincing fashion. Ex-Junior School students Om O'Carroll, Patrick Frost and Kanishk Mahasuar all competed in this great team who now qualify for State Finals. Together, they have 6 Junior School semester titles between them. Patrick Frost won the tournament individually which is a real credit to his chess diligence this year not only in his School Leagues but in the Ballarat Junior Club as well.
The team consisted of the following players:

Term 4 begins next week. There will be some exciting conclusions to Chess League, end of year tournaments to plan for and also several events such as State Finals to look forward to. See you all then!
Rob Bailey
BCC & BJC Coach

On the 27th of July, Ballarat Clarendon College participated in their very first over the board chess tournament for 2.5 years at Bialik College in Melbourne. 64 players in total played in the Chess Victoria Zonal event from 6 different schools. The tournament was a primary only tournament and was played in a wonderful friendly, competitive spirit. The result was a triumph for Ballarat Clarendon College, winning by 2.5 points. It felt so great to be back travelling to a tournament again, watching students make new friends in celebrating chess. We look forward to semi finals and potentially state finals later in the year. Well done team!

The Junior School currently has 60 participants in its chess club whilst the Middle Schools has around 70. Chess is in a good healthy place at the school as we rebuild momentum lost by the lockdowns.  More reports to come, watch this space! 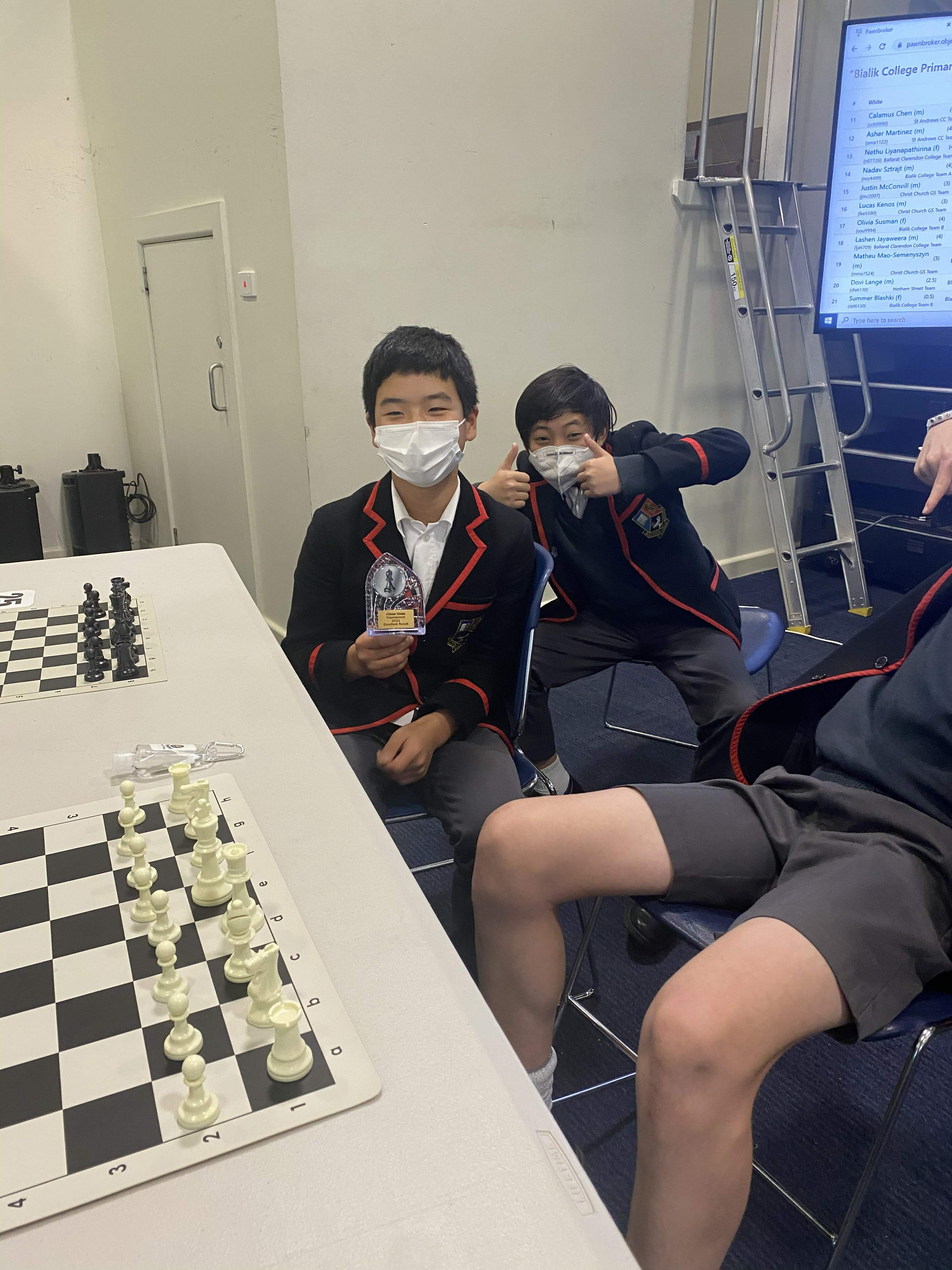 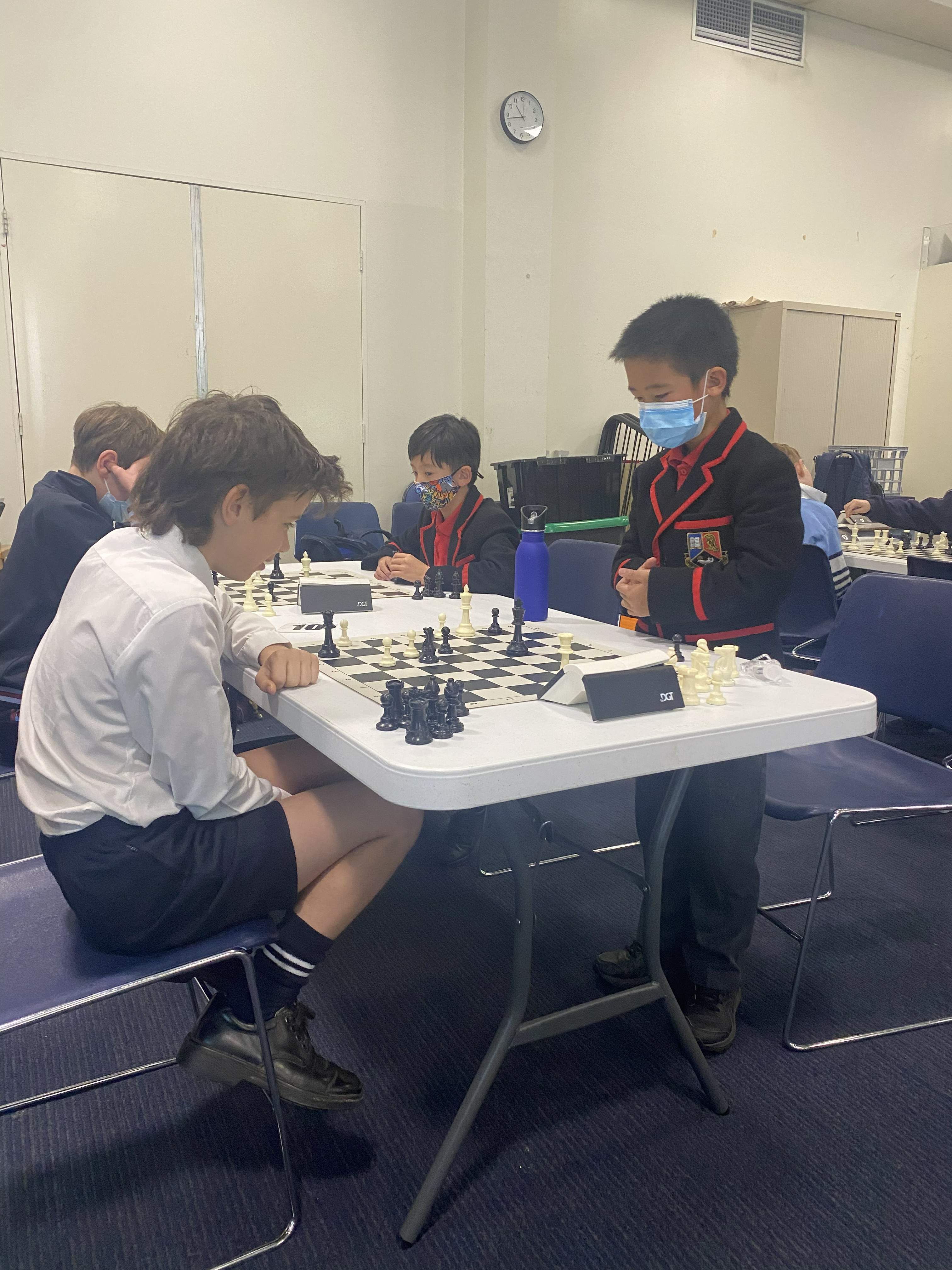 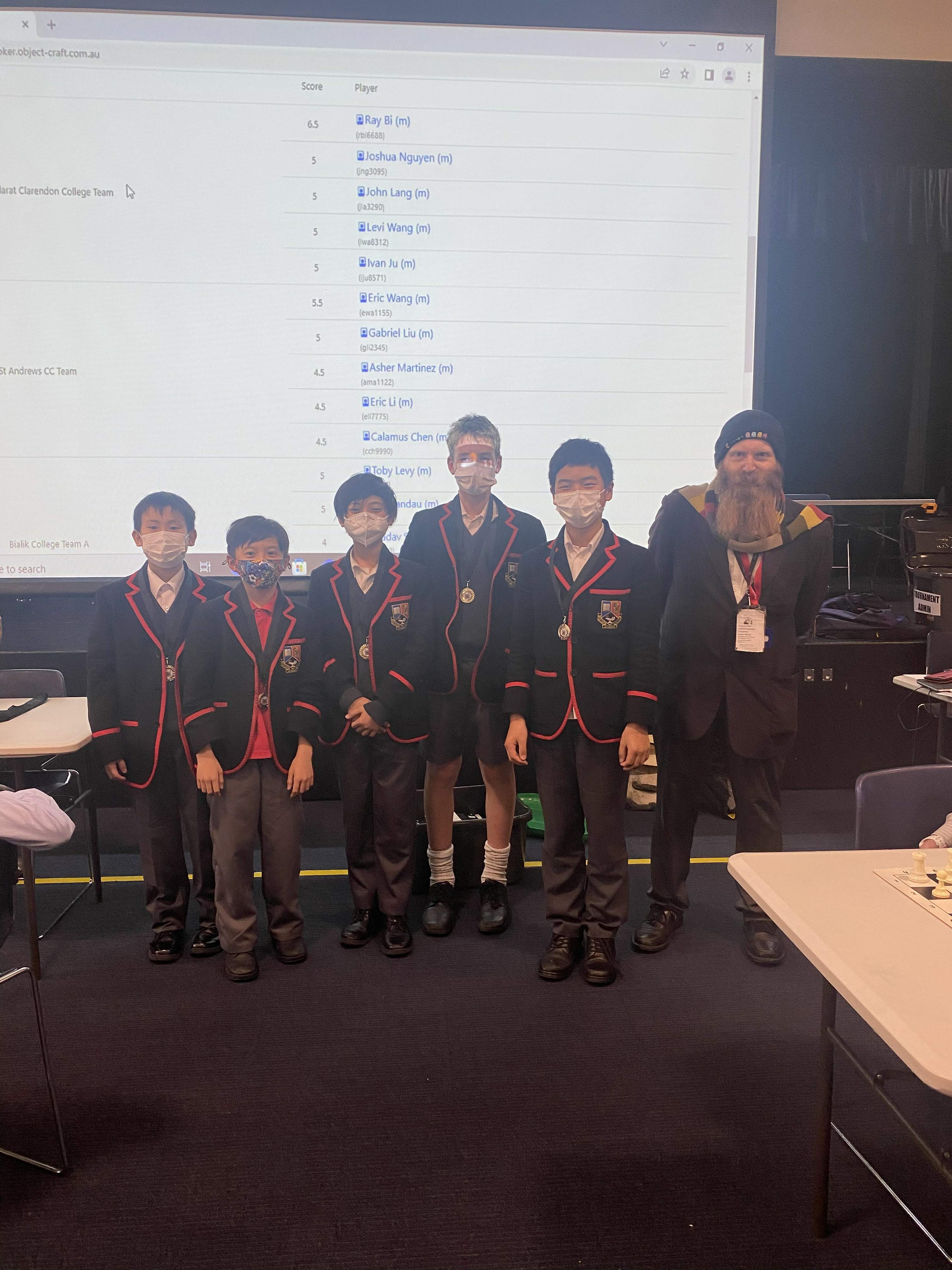 Unfortunately covid 19 had a detrimental effect on the attendance of the amalgamated Bishops and Kings League. However, it certainly didn't prevent the tournament from being diligently fought. Om O'Carroll was a very well deserving winner with Vishy Neralla showing excellent consistency to stay in the running to keep Om very honest. I anticipate greater exciting match ups in this division for term 2 with the resurgence of Dan and Andrew Wang. The class will continue their exploration of the history of the Women's World Championship. The expectation of a friendly match or even the resumption of inter-school chess is something everyone is very much looking forward to. This will vehemently demonstrate that chess is fully back alive and well in schools.

A closely contested term went down to the final round with Patrick Frost solidifying his favoritism to graduate to the higher league by winning the term 1 Pawns & Knights League tournament. The state finalist demonstrated great technique against Abtin Feizollahi to win a key game in a queen and pawn ending. Abtin played well all term; having come from Pleasant St in 2021 where he achieved third place in their end of year event. An honorable shout of recognition must also go out to Maggie Cai who was in prime contention all term and dealt Patrick his only loss. Maggie had a tough loss to Joey Wang in the last round. Term 2 League begins on the 26th of April and should prove exciting!

It was a fantastic close final two weeks and the top three in this tournament ultimately could not be separated. Wendy Tian made a triumphant return to the junior school chess club with two beautiful final mates in consecutive weeks. Jay Mutta's logical eager creativity was also on display; his piece development and general playing style showing great maturity. It was also Scott McKay's first chess term at the junior school, his sister Sasha paving the way for him. Scott's fine win against Wendy was her only loss; a result of complex tactical imbalances well handled by Scott. The playing level of this trio was most impressive and will no doubt inspire others to keep at it! Book prizes were awarded to all three for their achievements.

This tournament always delivers fascinating encounters and term 1 2022 was no exception. Rey Mukherjee showed great steely determination to win this hotly contested tournament. He has slowly but surely made some positional improvements on his aggressive attacking style and was tough for many regular students to break down. Lucas Yang returned to chess after making a sparkling debut in 2021 where he really shook up the established leadership and won several exciting games. His second place was well deserved, out-scoring even returning 2021 champion Ivan Ju who will hope to rebound in term 2. Third place was the ever energetic Jimmy Zhang who had a colossal tussle with Rey and very nearly went over the top to win. Their exciting roller coaster game petered out to a draw but was one of the most memorable of the term. The quiet achiever Sasha McKay won the best girl prize by coming equal fourth; a fantastic result. Junior chess is in a wonderful place at the school and the capacity of 30 has already been met. I certainly can't wait for more chess action!

With the absence of Paul Dao from the club, the tournament play at Pleasant St was much more wide open. The rapid rise and prominence of Harry Poyner was staggering to witness at times; as he produced some lovely creative and tactics laden victories. Cooper may have caught him if not for other sports activities competing for his attention! His logical, well considered classical style is also a good model for other developing players. In third was a happy Will Brunsden, a player who thrives on the chaos he manages to conjure on the board, often drawing players into messy awkward positions. He had a great term and I hope will return for more in term 2!  Pleasant St has grown wonderfully and is a very healthy place for members.