Bas needed to take the point from Cassandra to secure a spot in the first place, with Rod potentially taking half the limelight if he could win his game against Rob L. After a good strong start maintaining equality, Cassandra blundered in the middlegame to hand Bas the point.

Ruari defeated Harrison after some of his inexplicable plans lead to his demise; he moved his Bishop and Rook twice in the first 7 moves, ending up in their initial positions.

Rod played e4 ready for Rob's usual French defence which he avoided, playing e5 and deciding to defend the Fried Liver attack. (see below) 43 moves later Black was still up a piece, but moved into an endgame of Rook versus 3 connected past pawns - with a draw as best outcome. At 11:30 p.m. the game concluded and Rod had to be content with 2nd place, a half point behind Bas - this year's Koelle A Champion!

Leonard Goodison drew in the last round of the Reserves, leaving Jasan Barnett in the position of being able to win his game and the tournament, draw and tie first, or lose to Dan Wang and concede the tournament to Leonard. Jasan let himself fall into time trouble and eventually Dan took the point and the tournament from him. Both Leonard and Dan played with a performance rating over 500 points more than their actual rating, indicating we may have some rising stars in the Reserves! Congratulations to all!

Getting ready, Harrison does math with Ruari, and Leonard and Jasan ponder pairings

Rodney came back from a slightly shakey start to equalise then dominate the game by midgame when Jamie resigned sensing an imminent collapse of his position around the corner. Ruari launched into an aggressive game as White against Patrick who played sensibly, capitalising on Black's inaccuracies and eventually swapping down to a won position. Bas took his point against Ben who allowed his Queen to be pinned after castling, and Heath was a no-show in his game against Rob L. Cassandra defeated Tom, and the biggest upset of the night was a draw between Harrison and Anna, their game not yet posted so looking forward to clarification about what happened there!

Patrick battles on, Sue ponders, and Ben and Bas cogitate

Round 5 - Bas held Heath to a draw, while Jamie and Rod both won their games, bringing them to equal first on 4 points. Ruari defeated Kevin, showing he is another young player ready to overthrow the status quo. Jasan and Leonard head up the Reserves on 4 points apiece.

Round 4 - Bas is holding onto his half point lead after chasing Patrick's Black King up the board to d2 where he died alone. Rob took advantage of a mistake by Ben and after surviving a do or die attack, garnered the full point. Rodney came from behind in his encounter with Cassandra and a couple of inaccurate moves were enough for him to regain the upper hand and take the win. Jamie got a free point from a forfeit as Heath was unable to come. Harrison played a 'word opening', manually castling his King via a walk through the first 3 ranks, but Kevin was unable to capitalise on his lead in development and eventually succumbed to Harrison's superior play. Tom was gifted a piece by Anna which compounded her problem of an inferior position, dooming her to an early night. Ruari, happy to have just finished a Uni math exam, defeated Caitlin. In the Reserves, Leonard and Jasan head up the pack, a solid point ahead. 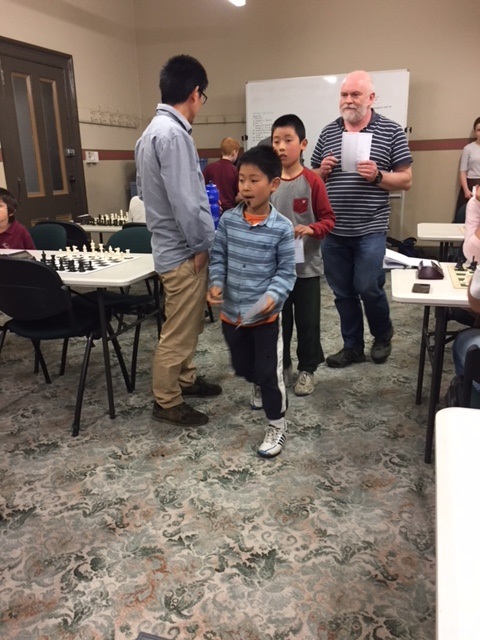 Getting ready to go.

Round 3 - Biggest upset was Ben Naughton's win over Harrison Harrison - a great breakthrough for him against a much higher rated player. Bas, on 2.5, still holds a 1/2 pt lead after his draw against Rob. Half of the A grade are now sitting on 2 out of 3 points. 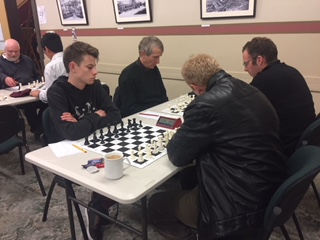 Heath is back - Patrick held him to a draw.

As we move into week 3, Bas has won 2 out of 2 and heads the field. Many players have availed themselves of the 1/2 point byes, proving that it is a welcome option for those wanting to participate but not able to attend every week.

Round one saw Tom defeat Harrison in the biggest upset - no game up yet so still in the dark about what happened. Cassandra and Rob had a very even game which Rob won with a bit of luck, and with her Round two win against Ruari, she showed has got what it takes to make an impact on the outcome of this and future tournaments in the club.

Getting ready. Patrick prepares for a quick joust while Rod writes up the scoresheet.

Should White take the Bishop leaving Black a clear path to queen his pawn, or go and attack the pawns via d6? Cassandra faced this decision in her game against Rob L, and unfortunately picked the wrong option, letting Rob of the hook!

And how should Rodney react to Bas' Bishop to g5? The black bishop is busy protecting the g pawn and can't go to e7... Rodney missed the best continuation and Bas went on to win; so would you push the f pawn or do something else?

Enter your games at Chessmicrobase

Mr. Arthur Koelle was Victorian Junior champion in 1968 at 14, Country Victorian champion in the same year, and Club champion, also in 1968 as well as 1969. Most of these achievements are age records to this day! He went on to win the Australian Junior championship in 1971. Arthur has been living in Germany since 1982 and competed in the famous Bundesliga club competition, mixing it with experienced grandmasters, up until the mid-1990’s when work commitments became more pressing. Due to rising numbers of participants the original round robin format for the A Grade has now become a Swiss tournament, while the B and C Grade tournaments' format depends on the number of entries. The inaugural tournament was held in 2011.